Start a Wiki
Welcome to the Marc's Story of King Arthur Wiki!
The historical basis for King Arthur has long been debated by scholars. One school of thought, citing entries in the Historia Brittonum (History of the Britons) and Annales Cambriae (Welsh Annals), sees Arthur as a genuine historical figure, a Romano-British leader who fought against the invading Anglo-Saxons some time in the late 5th to early 6th century. The Historia Brittonum, a 9th-century Latin historical compilation attributed in some late manuscripts to a Welsh cleric called Nennius, contains the first datable mention of King Arthur, listing twelve battles that Arthur fought. These culminate in the Battle of Badon, where he is said to have single-handedly killed 960 men.

this is where Marc comes in, having been fascinated he redid the entirety of Arthur's story and made is own storyline inspired by the older ones. 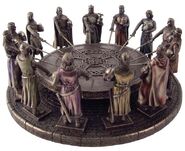 Knights of the Round Table

The Formation of Britain 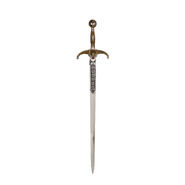 Excalibur
Add a photo to this gallery

Need help building out this community?

You can also be part of the larger Fandom family of communities. Visit Fandom's Community Central!

Retrieved from "https://marcs-story-of-king-arthur.fandom.com/wiki/Marc%27s_Story_of_King_Arthur_Wiki?oldid=229"
Community content is available under CC-BY-SA unless otherwise noted.